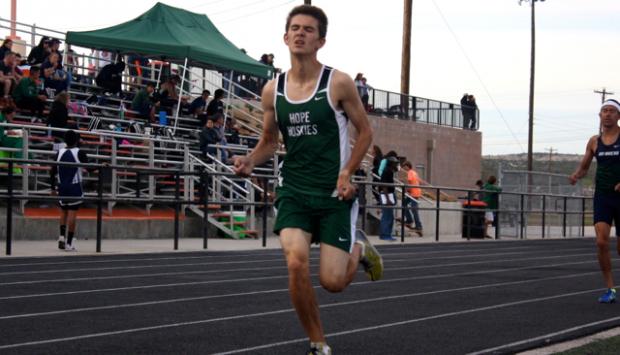 Hope Christian's Peter Siminski looks to help the Huskies to the top of the Class 4A podium at this weekend's 4A-6A Track and Field State Championships. Photo by Holly Patterson.

The battle for the top of the Girls 4A podium looks to be a three team affair between the Ruidoso Lady Warriors, Hope Lady Huskies, and the Sandia Prep Lady Sundevils.

Behind top seeds Shalom Keller (100m, 200m), Andi Harrelson (Long Jump), and Lia Mosher (High Jump), the Lady Warriors have their sights set at the top of the podium. With 14 state entrants, the Lady Warriors should have enough depth, and quality, to fend off the other contenders. 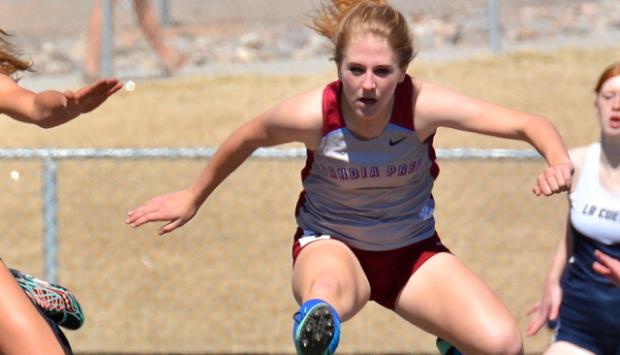 Sandia Prep's Mackenzie Blackburn is the top seed in the Class 4A 300m Hurdles at this weekend's 4A-6A Track and Field Championships. Photo by Blake Wood.

The Sandia Prep Lady Sundevils are perhaps the most intriguing podium contender. Despite their 11 state entrants, the Lady Sundevils boast eight top seeds in the Friday Heat Sheets. Led by Kiersten Huitt in the 100 Hurdles, Kalei Yepa in the 400m and 800m, Mackenzie Blackburn in the 300 Hurdles, and Brooklyn Armijo in the Triple Jump, the Sundevils also boast the top times in three relays.

Two other teams to keep an eye on are the Taos Lady Tigers and the St. Michael's Lady Horsemen.

The fight for the top of the Boys 4A podium looks to be between two teams.

Looking to give the Huskies all they can handle are the Taos Tigers. While the Tigers only have Daniel Isiah Babb (Long Jump) as a top seed, their depth is their strength. With 15 state entrants available, the Tigers should have a few fresh legs come Championship Saturday.

Four teams potentially vying for the podium as well are the St. Michael's Horsemen, the Bloomfield Bobcats, Silver Mustangs, and Portales Pintos. Should Zack Vigil and his 27 Horsemen teammates click, they could make a run at the podium. Although, as was shown by the Clayton Yellowjackets in Class 3A, quality kills, and both Adrian Vigil and Gabriel Aguirre will led their six Bobcat teammates this weekend. Or perhaps Brandon Chavez and Jerry Arroyo will be enough for the 14 Mustangs to make the podium. If them, then perhaps Paul Conrow and his 12 Pinto teammates will be the one's to get a trophy.

Regardless of how it turns out, hope for fair weather to ensure peak performances. And remember, don't stand on the railing to watch the races. Best of luck to all!