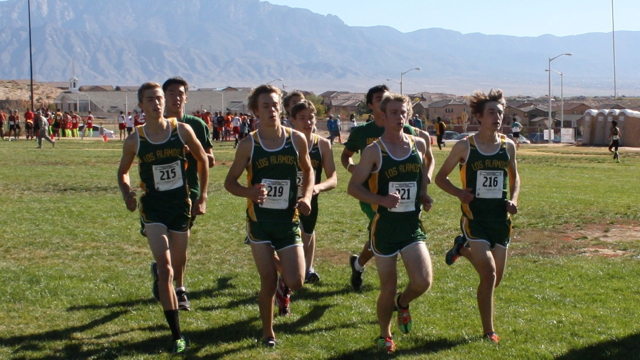 The Los Alamos Boys were the top team in the Merged State Results and look to led New Mexico's contingent at NXN-SW. Photo by Holly Patterson.

The 2013 NX-SW Regional saw six New Mexico boys teams in the Championship Race, and an additional five in the Open Races, along with numerous individual participants in both races. As well as four girls team in the Championship Race, and another seven in the Open Races. While these numbers are encouraging, the results from the soggy fairways of Toka Sticks were less so.

ABQ XC (Albuquerque Academy) led the way on the Boys side with a solid 7th place finish, but the next NM team placed 22nd (Los Alamos), then 26th (Eldorado), 27th (Cleveland), 29th (Rio Rancho) and 31st (Zuni). While in the Girls Championship, Los Alamos XC placed 13th, followed by ABQ XC (Academy) at 15th, Eagles XC (Eldorado) at 20th, and the Running Rams (Rio Rancho) at 23rd. Not the best of days for NM Cross Country.

The 2014 prospects however look promising, but the 2013 race left an impression on the Selection Committee as only three Boys and four Girls teams made the cut for the Championship field. The other 11 Boys and eight Girls teams are in the Open races, so the participation numbers are still there.

Coming in with a three-pronged attack from the staples of ABQ XC, Los Alamos XC, and the Running Rams, the NM contingent, while small in numbers definitely makes up for in quality as these are the three best. Albuquerque XC’s Jordan Lesansee, Los Alamos XC’s Cameron Staples and the Runnig Rams’ Devin Paredes will lead their attacks, but perhaps the biggest weapon these three NM teams have is their Pack Time.

ABQ XC posted an average Pack Time of 43 seconds, while Los Alamos went 38 seconds and the Running Rams went 42 seconds. This is for the entire fall campaign. At their fastest races, they went: 40, 12, and 31 seconds, that folks, is capital “f” Fast. That is also the type of day they’ll need to have in order to compete with the rest of the Region, and could potentially lead to a team placing in the Top 5, and possibly two in the Top 10.

Anything higher than 5th would have to include some serious luck, as American Fork (UT), Davis (UT), Desert Hills (UT), Desert Vista (AZ), Mountain Vista (CO), and Timpanogos (UT), are looking to finish in the Top 5 as well. As a reminder, Mountain Vista came down to UNM and cleaned up in an early season match-up, and Desert Vista turned away both Rio Rancho and Los Alamos at Desert Twilight in early October. And of course, American Fork is still American Fork, as is Davis still being Davis.

What may end up being NM’s best chance at qualifying anyone for NXN Nationals is on the Individual front. 15 boys will toe the line, with Jakob Bernal, Jared Garcia, Shawven Levi, Niles Thomas, and Aaron Valenzuela being the big names amongst the 15. As NM’s top performer, Thomas brings his 9-0 record, and fastest time of the day at the State Championships with him.

Minus La Cueva, these are the four best teams NM has to offer, with a front runner to bolster their attacks. Dara Porcell for ABQ XC, Madison Foley for Los Alamos XC, Cora Cannedy for the Northern NM BAES, and Andi Almodovar for the Running Rams are supported with solid Pack Times from two weeks ago.

However, even with Pack Times ranging from 1:09 to 1:44, these NM Girls Teams face a very stacked field. The major players from Utah (Davis, American Fork), Colorado (Monarch, Cherry Creek, Fort Collins, Fairview), and Arizona (Desert Vista, Xavier Prep) are all fixing to descend on the Arizona Grande Sports Complex. And when they do, a Top 10 finish will be a good day, and a Top 7 a HUGE day. In order to crack the Top 5, an A+ game and some luck is in order.

Similar to the Boys race, the best chance for a National Qualifier may come from the Individual participants. Esther Beck, Natasha Bernal, Arena Lewis, Carisma Lovato, and Melia Macias headline the NM Championship entrants. Bernal and Lovato head down as the heavy hitters, with Bernal being undefeated, and Lovato posting the fastest State time, as well as being NM highest placing finisher in 2013.

However the Championship Races play out, it’ll be great seeing a many of New Mexico’s best racers going head-to-head with the Southwest Region. Best of luck to all!