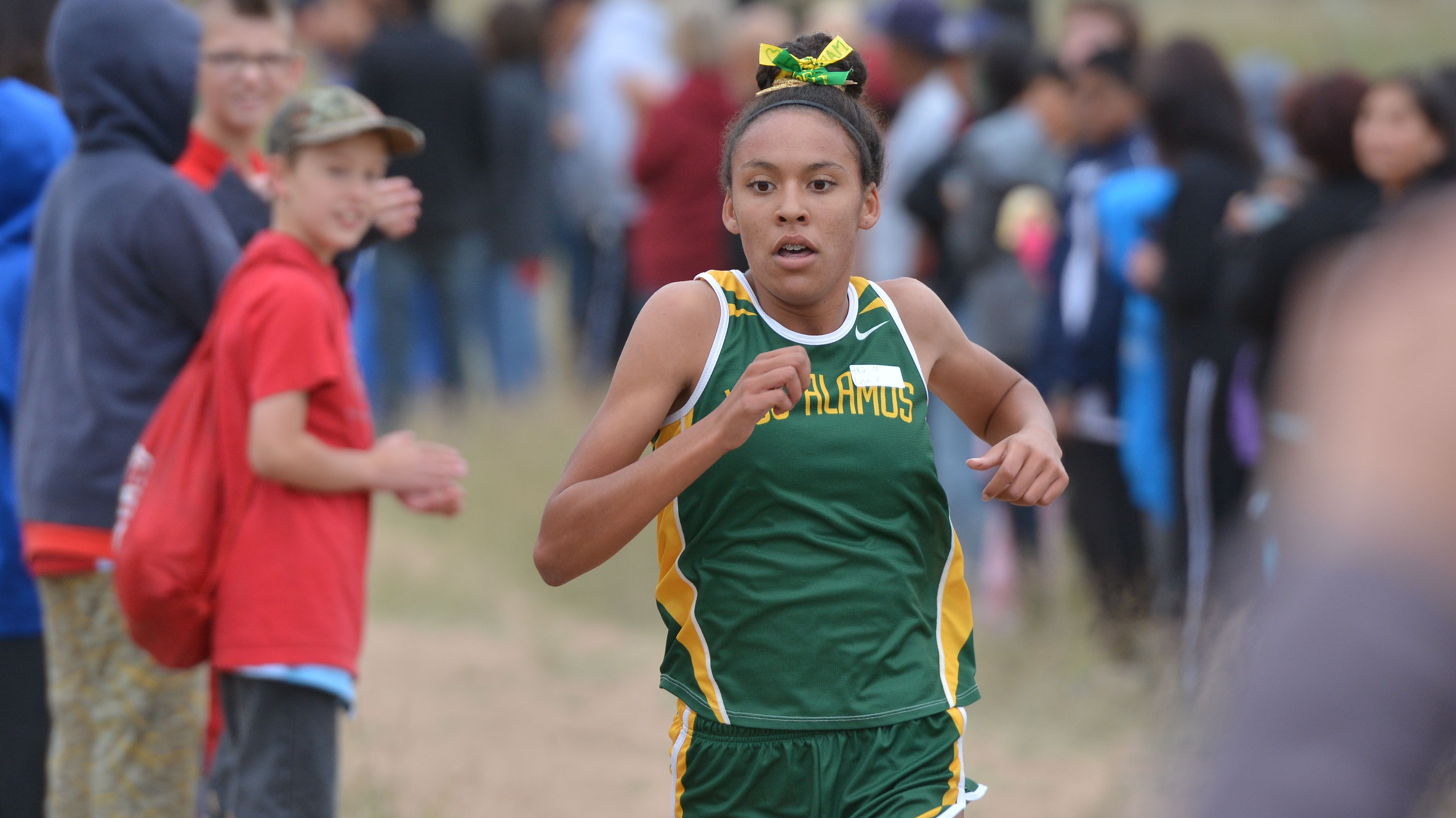 Los Alamos' Madison Foley rolled to a 31 second victory at the ATC Everyody Invite. Cover Photo and above Photo by Blake Wood.

(Editor's Note: I did receive results from the SPX 5-Star Relay, but since the Meet was so "redifined, reinvented, and dissected" [words of Coach Turcotte], I'm still trying to find the best method to upload the results so they can be recognized in the database. Until I can find a best practice, they unfortunantly won't be posted.)

Cibola continued their early season domination by sweeping all titles at the Hardrock Pavilion. Scoring 16 Team Points, the Lady Cougars were led by Nicole Lawrence and Nichole Gomez. While their 1:44 Pack Time can be improved, the fact that their 21:14 Team Average was 2:05 faster than the Team Runner-up shows how dominating their win was.

Not to be out done, the Cibola Boys were led by Chris and Ryan Harlow, and Lukas Matthews who went 1, 2, 3 and helped the Team score 19 points. Again, 91 seconds for their Pack Time can see improvement, but a Team Average that's 55 seconds faster than the Runner-up made their win emphatic. It's been a good two weeks for the Cougar Program.

I'm not sure which of the Rairdon sisters this is--I am unskilled at making those distinctions--but there is a message here for 2A girls cross country. Photo by Jeff McCoy.

The Liberty Bell D2 boys race got out the same way it finished--with Zachary Alhamra in front. Photo by Jeff McCoy.

Lauren Gregory finished in front, well ahead of the pursuit. Photo by Jeff McCoy.

The battle between Mountain View and Pine Creek played out in multiple arenas. Photo by Jeff McCoy.

It's a crowded start at Liberty Bell, no matter which race. Photo by Jeff McCoy.

Fort Collins sophomore Lauren Collins smoked a 17:16 5K on Friday at the Liberty Bell Invitational in Colorado, which puts her as the second fastest in the country. Meanwhile, her nationally ranked team as well as Cherry Creek both got bull rushed by the Monarch girls who took down both US top 25 ranked teams in decisive fashion with their team tally of 53 points putting 5 runners in the top 15 places with a time range from 17:55 to 18:32.

Never underestimate how contentious things get on a Liberty Bell start line. Photo by Jeff McCoy.

As you start thinking of out-of-state entries who have the potential to snare a Liberty Bell crown, Jordan Lesansee of Albuquerque Academy should be on your list. Colorado Track XC file photo by Alan Versaw.

A current listing of all entered athletes for Friday's running of the Liberty Bell Invitational.

Probably the worst draw on the entire starting line. Photo by Jeff McCoy.

Running like a seasoned veteran, St. Mary's freshman Hannah McReavy bided her time early and came up big late for a fifth-place finish at the Pueblo Central Inviational. Photo by Alan Versaw.

One of the iconic images in Colorado high school cross country is the first pass by the bridge at the Pueblo Central Invitational.

This moment in Colorado cross country history brought to you by the Golddigger Dash. Contributed photo.

Holly Bent led a storm of Monarch Coyotes to the Liberty Bell finish line on Friday. Photo by Jeff McCoy.

The tight start of the Southwest XC Challenge requires athletes to get out quicker than normal. Photo courtesy of Sampson Sage.