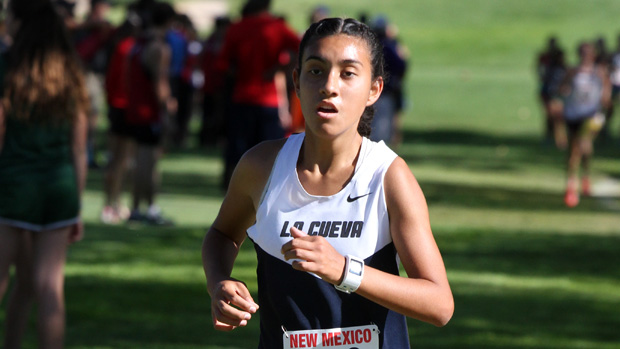 La Cueva's Natasha Bernal powers away from the field for a dominating victory at the UNM Lobo Invitational. Photo courtesay of Alan Versaw.

Alamogordo played host to many of the Las Cruces Schools, with the Onate Knights making the biggest impact.

Led by Meghan Aguilera and Thomas Salas' Individual Titles, the Knights made a clean sweep of the Invitational Titles claiming both Girls and Boys Team Titles with 38 and 39 points respectively.

While Season Goals still lie ahead, there's no better way to start the season.

You know all about Ben Butler, but Isaac Holm is busy adding a little depth to the SkyView Academy roster. Holm finished third in the 2A/3A race at St. Vrain with a time of 17:44. Photo by Ron Eberhard.

The high school boys race gets underway under the shade of the abundant cottonwoods at Alamosa's Cattails Golf Course. Photo by Eric Flores.

Fanning the flame of the season

Emerald Goranson was Socorro's top finisher at state last year as a freshman. On Friday, she gets to help set the tone for a new season at Socorro's own home meet. Photo by Alan Versaw.

Paxton Smith and Tyler Matzke get most of the ink, but it's guys like Addison Hellier who keep the Mountain Vista team score low. Photo by Alan Versaw.

Tanner Norman and Tyler Matzke negotiate the never-ending gauntlet of spectators at the UNM Lobo. Photo by Alan Versaw.

Testing the waters in New Mexico

Allie Chipman uses a downhill stretch to build a little momentum and take over second place with a little over half mile to go in the race. Photo by Alan Versaw.

A look at the UNM Lobo Invitational

Last year on this weekend, Paxton Smith was a contributing member of the Mountain Vista varsity at the St. Vrain Invitational. This year, he's one of Vista Nation's go-to guys in Albuquerque. Photo by Alan Versaw.

One of the showdowns to look forward to on Saturday is a first match-up between an even-more-loaded-than-last-year Rio Rancho team and the defending state champions from La Cueva who return with most of last year's roster intact. Photo by Alan Versaw.

A St. Vrain start is always a marvelous thing to behold. You get that opportunity come Saturday. Colorado Track XC file photo by Alan Versaw.