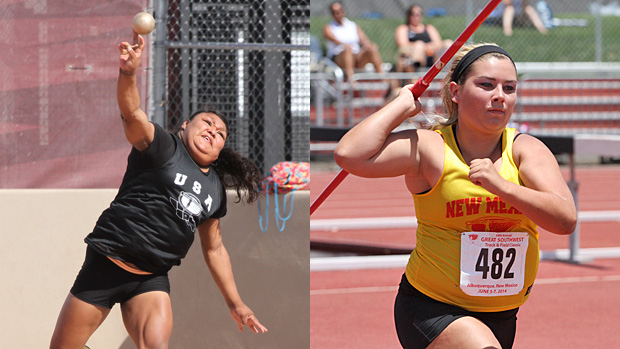 It's probably a good thing that New Mexico is the host state of the Great Southwest. Being the state of smalles population on the Great Southwest map, playing host helps to offset some of the disadvantages of population. All things considered, it was a good meet for the home folks, with several Saturday places to add to the sweep of the steeplechase titles on Friday evening.

But, there was a lot more of New Mexico on the track that Tiffany Garcia. Other individuals earning points for the home state on Saturday would include:

and, missing placing postion but coming close with nice marks were:

While the participation count made places more difficult than ever to earn, the number of athletes present did indicate the strength of the Great Southwest concept. While some similar post-season meets have struggled to maintain their market share, Great Southwest has demonstrated that their concept is alive and well. We may, however, have to find a way to turn down the heat on Great Southwest weekend.