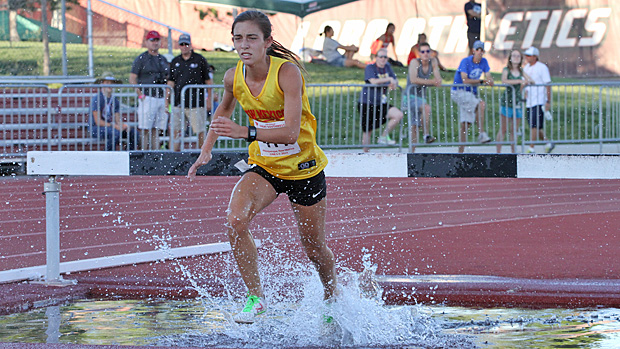 The early stages of the girls steeple were led, and convincingly so, by Gabryelle Thompson of Texas. Thompson's run at the front, however, come to an early demise when she became the first of the field to take a serious plunge at the water jump.

Seizing the opportunity, Carisma Lovato surged into the lead and was never heard from again. Lovato continued to build her lead on every lap, eventually amassing a margin of 43 seconds on second place, looking every bit the established veteran. Lovato's winning time was 7:33.09.

Second and third places also had a familiar sound for the New Mexico crowd gathered. For yet one more time in their high school careers, Cassey and Crissey Amberg finished consecutively, this time with Cassey edging Crissey by mere hundredths of a second.

Going into this event, nobody was anticipating a 1-2-3 sweep from New Mexico, but that was how it ended nevertheless.

The story was every bit as good on the boys side. Somehow, Alex Heffelfinger got into the race without a New Mexico singlet. The singlet he was wearing looked suspiciously like a Utah singlet, which would be a great strategy considering that Utah figured to dominate the event, but it was probably not intentional. And the fact that Heffelfinger had his bib number pineed over the imprinting on the front would tend to suggest that the meet ran out of New Mexico singlets and gave Heffelfinger the next best thing for this event. 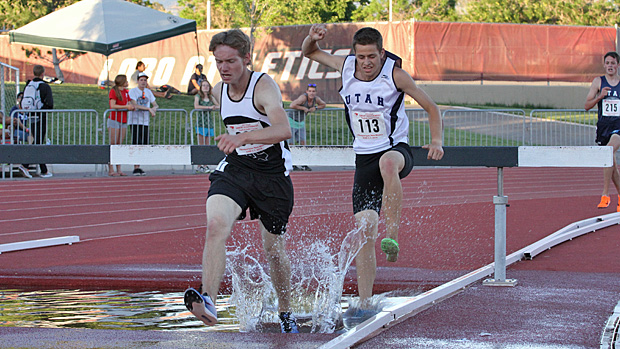 And, stubbornly, Heffelfinger refused to cede anything to the dwindling crew at the front. On the final pass over the water jump, Heffelfinger (photo, above) had built a lead of one or two strides over Utah's Braedin Butler and Heffelfinger managed to extend that lead to three seconds in the remaining 120 meters to the finish line, finishing in 6:19.04. And so the New Mexico sweep of the steeplechase titles was completed.