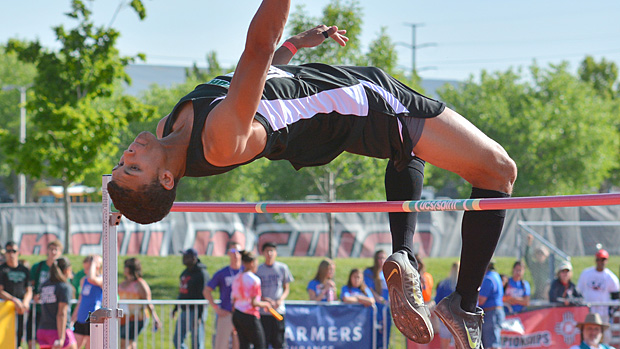 By now, we all know that Taos, Aztec, Farmington, Cleveland, and Eldorado are each showcasing shiny new state track and field trophies in their respective buildings. For these schools, the state meet held the big reward. Some won state title by very narrow margins and some blew the meet wide open, but all are state champions. And the assemblies that celebrate those feats these week are worthwhile assemblies. One sure way to get less of excellence is to ignore it when it happens.

The trick here is to say something worthwhile about the state meet now that the dust has settled and the local newspapers have all had their turn at dissecting all that went on over the state meet weekend. I'll do my best.

For Taos, the lesson learned by the rest of the state is the balance, like speed, kills. Balance, in fact, trumps speed. Even in a sprint relay heavy state like New Mexico, speed alone will rarely earn you a state title. Taos earned a pair of state titles by making the opposition pay at nearly every event area. And, yes, Taos did have sprints, too.

Taos apparently located a copy of the Silver playbook from the last two years and fine-tuned a few things. It worked marvelously.

The Taos girls got nice points from Amanda Mondragon and Angelica Pacheco in the sprints, and the Tigers picked up two very helpful firsts in sprint relays. Beyond that, however, Taos was deadly at distance, picking up four points in Friday's 1600 and six more in Saturday's 3200. Taos went quietly in the hurdles, but not at all so in the field events. Alyssa Bozzuto picked up a second in the javelin, a win from Midnight Lujan in the high jump, a third from Miranda Vigil in the long jump, and a second from Vigil in the triple jump on Saturday. That's a lot of challenges to answer and nobody was up to it.

The picture of domination was even clearer for the Taos boys. The Tigers scored in every relay, including firsts in the 4x200, 4x400 and Sprint Medley. That right there gave them an enormous edge on the field, but it certainly didn't end there. Roy Madrid won the 800. Madrid and Donevan Gravelle got a 2-3 in the 1600. Madrid and Gravelle went 3-4 in the 3200. Isaac Gonzales won the long jump.

4A boys came down to the explosive events of Farmington versus the distance-laden squads of Los Alamos and Albuquerque Academy. The trouble, however, with Los Alamos and Academy both being distance programs is that they tend to deal each other blows where distance events are concerned. That, and the rest of New Mexico 4A may be catching up a little at the distance game. In short, it's not as deep of a well as it used to be for red and green.

Meanwhile, Farmington was pouring on the points in their own specialty areas. Devin Hull won the 400 and earned a third a little later in the 200. Avery Rasher won the high jump. Miguel Andujo got second in the pole vault. Tierney Staley stuck a third into the javelin sector. Perhaps most importantly, the Scorpions stung for 26 points in relays, being only a whisper away from 28.

New Mexico's scoring is relay heavy to begin with, and the relays are sprint heavy. Trying to win a state title from a distance base, or a jumps base, or a throws base, is an uphill battle from the start. Seeing this makes me happy that I live where relays don't carry more points than individual events and where we have at least one "distance" relay, but it's not even close to my task to decide what's best for New Mexico. What is clear, however, is that it's pretty important to be able to score well in sprint relays in New Mexico. Until and unless the rules of the game change, that's the #1 rule for winning.

Among 4A girls, the much-hoped-for showdown between Aztec and Santa Fe delivered everything promised, and more. On paper, Santa Fe seemed to have the right formula for New Mexico success. The Demons were sprint heavy and sprint relay heavy. They had a nice distance ace in Noel Prandoni, and Akeisha Ayanniyi branched out to the long jump.

But, Aztec branched out just enough into the sprint relays on their own to make their field event heavy formula work. But, let's be clear, the formula doesn't work without event winners like Kayli Farmer (high jump), Morgan Smith (pole vault), and Sarah Root (triple jump). Root and Farmer also pulled a couple of seconds. Root's first in the 100 hurdles and second in the 300 hurdles were huge as well. In the end, though, there was no surviving without the 20 points Aztec accumulated via relays. Last year's formula wasn't going to work this year, and somebody at Aztec was sharp enough to realize that before the critcal moment and make the necessary adjustments.

And, from Aztec's perspective, it certainly didn't hurt that Arena Lewis and Kelli Reagan come up with huge performances in the 1600 and 3200 that shuttled Noel Prandoni a little further back than Santa Fe may have hoped.

Surely, this ended up as one of the best state meet contests New Mexico has ever seen. Two great teams, but only one champion. And that is as it should be no matter how many great teams there are.

5A boys? You probably didn't even need to ask. Cleveland was supposed to run away with it, and they did. The Storm has the formula down to the point of overkill. They run a scorched earth policy on relays and never let up in individual events. There really aren't a lot of ways to lose when you take two firsts, a second, and a fourth in the four relays. Cleveland didn't have an overflow of state meet-scoring kind of sprinters this year, but they took what they did have and made some very potent relays out of them. Combine that with event winners like Nathan Munoz, Kyle Petrey, Jared Mayoral, and Tyler Chavez, and it all adds up to a very strong state meet performance.

Clearly, there is a track and field culture at Cleveland that most schools in the state simply aren't able to match.

That track culture, however, wasn't enough to tide the Storm over into a matching girls title. Where girls track and field is concerned in New Mexico, Eldorado is where it's at right now. The Eldorado girls took care of the requisite relay business with 28 points. You can't ignore the big point events, and Eldorado didn't. Then, the Eagles came through with big individual event titles from Kyra Mohns (Mohns also finished second in a couple of very important hurdle races), Crissey Amberg, Jessie Hix (photo, below), and Lauren Martinez. That left a lot of dust in the Eagles wake for the rest of the teams to find their way through. 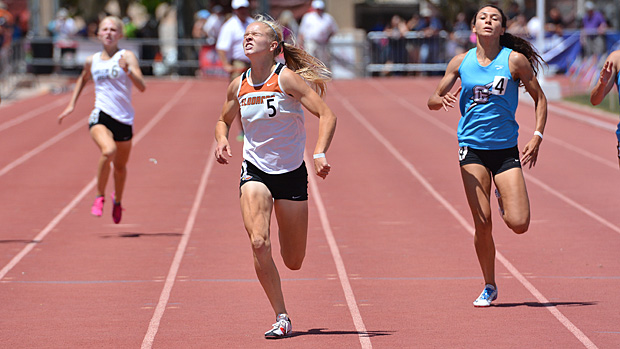 None of them did. It's tough going in a dust storm. La Cueva came closest to Eldorado but still found themselves 21 points in arrears. It doesn't get much better next year unless someone steps up their game. Eldorado brings a whole bunch of the cast for more next year. But, the silver lining for La Cueva is that they are a team with a very strong junior class, and possibly a very good memory.

If you're looking for a call on the best mark of the weekend, my finger to the wind tell me that belongs to Piedra Vista's Beau Clafton (photo, below) with a launch of 202-10. 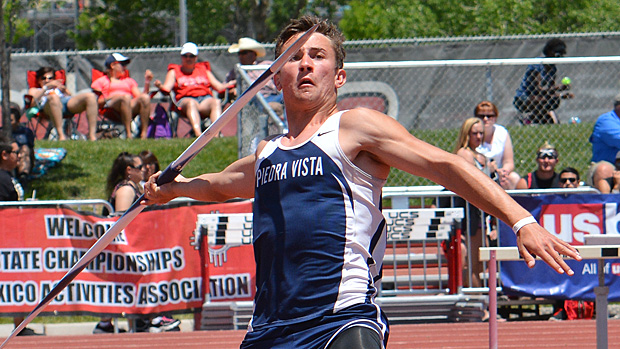