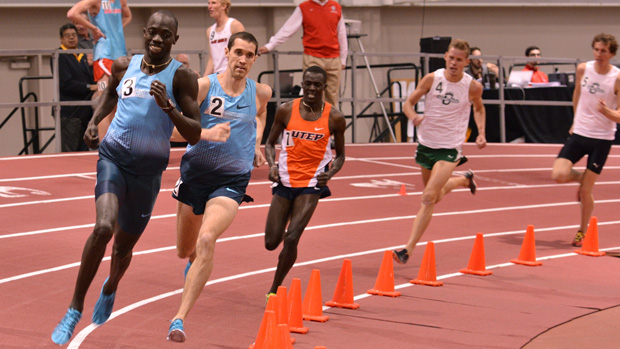 At this point in the men's mile, Lopez Lomong was still leading Ryan Hill, but it would be Hill who would finish under 4:00. Photo by Blake Wood.

If you missed Saturday's Cherry and Silver Invitational in the Albuquerque Convention Center, you missed a lot. Big-time track and field has landed squarely in the Land of Enchantment.

Until then, there's more indoor action hosted by UNM to be had. But, first, let's take a look at what happened on Saturday...

And there were many more highlights to be found--just exactly what you would have expected when you get Florida State, USC, Texas, Arizona, and Arkansas sending delegations to the same meet. The marks you see listed above just scratch the surface of the highlights.

This Saturday? Well, that would be the New Mexico Team Invitational. Stop by for more great collegiate action.