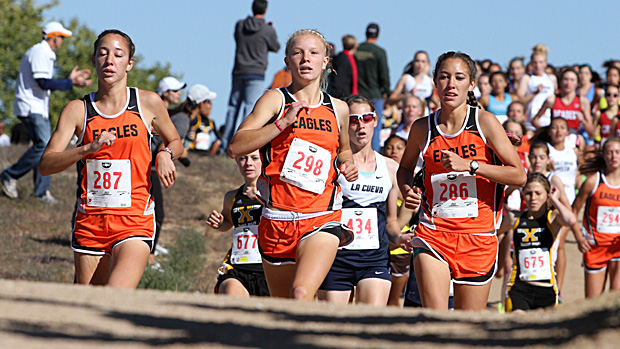 Eldorado seemed intent on proving a point, with Jessie Hix and the sisters Amberg going straight to the front of Saturday's girls varsity race. Photos by Alan Versaw.

Eldorado's girls made it clear from the beginning that they were out to dominate the Metro Championships. But, the final telling of the tale would have things much closer anyone would have anticipated. Yes, Eldorado, took home the oversized traveling trophy, but there was much more revelation of the soft underbelly of the monster than was ever in the day's plan.

400 meters into the girls championship, everything had the look of a major beat-down. Eldorado had three across in the front of the field and reinforcements strategically placed through the upper echelons of the rest of the field. Spectators looked on shock and awe and resigned themselves to the idea that the battle would be for second.

But Papa Bear--"This hill is too steep!"--offered an early hint that what you read in the first chapter isn't necessarily how the book is going to end. Even as early as the winding hill just before one mile, the Eldorado stranglehold on domination was weakening at the fingers. Cassey Amberg was losing tiny stretches of real estate to Jessie Hix and sister Criseey, while Kelli Reagan and Molly Klein (photo, below) refused to settle into the places appointed them by the Eldo trio. 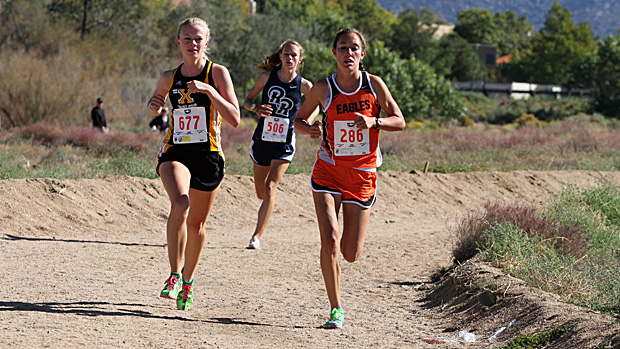 At two miles, the unraveling of the Eldorado plan was evident. Crissey Amberg remained in the lead, but Hix's race had vaporized into the dry New Mexico air. And even Amberg's lead was no longer safe as Reagan and Klein were nipping at her heels. Amberg, Reagan, and Klein battled down the stretch beside the solary array and left the outcome of the race to be decided by the northwest corner of the course, the section that makes two aggravating passes over the soft earth of the arroyo.

Meanwhile, Cassey Amberg was experiencing back-side pressure from Academy's Cameren Kirstensen and St. Pius's Julie Giannini. As the race entered its final 800 meters, there was much to keep the spectators nibbling at their fingernails.

Reagan stayed close on Amberg's heels, but was never able to overhaul the Eldorado leader. Klein dropped slightly off the lead pace but protected her third position in the order. Cassey Amberg found the resolve to fight off the challenge of Kristensen and Giannini.

For Eldorado, though, this win would owe more to the efforts of the back four than to the show of force demonstrated early by the lead pack of three. It was Coley Norcross in ninth, Melia Macias in 19th, and Jessica DePoy that preserved the victory--each one holding off their corresponding runner from Albuquerque Academy.

And so, Eldo did prevail, but not according to the script. And that is the sort of thing that can eat at you a little until the next opportunity arises.

A half hour earlier, the boys race played out with little of the measure of drama that accompanied the girls race. 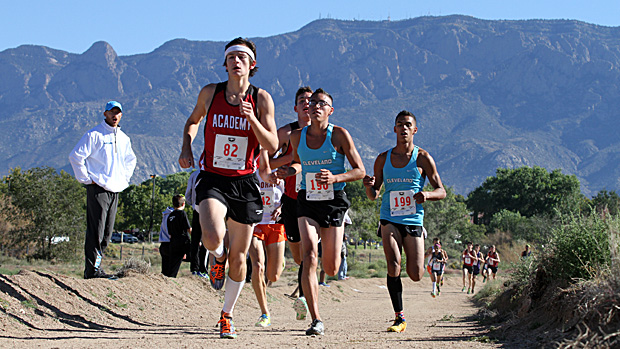 By the top of the course, a breakaway pack (photo, above) of Kyle Carrozza, Aaron Flores, Jared, Mayoral, Kevin Wyss, Chris Harlow, and Taylor Potter had emerged, and it was clear that the winner would come from that group of five. Eventually, these six would finish in the order of Carrozza, Potter, Wyss, Mayoral, Harlow, and Flores.

Only it wasn't as easy as all that. Before taking the win, Carrozza had to wear down the resistance of the challengers on a one-by-one basis. He had most of that accomplished by the time that the course entered the northwest loop. The one who refused every opportunity to fold was Eldorado's Taylor Potter. Potter doggedly kept the pursuit through the gauntlet of fans lining the finish, but never found the passing gear. In the final moments of the race, Carrrozza was able to find his own surge and padded his lead on Potter by several additional seconds.

With 1 and 3 nailed down, Albuquerque Academy had little to do but wait for their remaining finishers to come through. It was not the grandest show of domination AA had ever delivered on their home course, but Stanopiewicz in ninth, Lesansee in 11th, and C de Baca in 12th more than got it done. The Chargers' 36 points easily turned aside the Rio Rancho bid that tallied 77.

If you're trying to handicap the 5A boys race four weeks out from state, Rio Rancho still owns the favored position, but the Rams have to be feeling the icy cold breath of the Storm on their backs. With each week, Cleveland seems to draw a little closer to the fore. Eldorado, too, offered a solid showing on Saturday and shouldn't yet be taken for a candidate for life support.

La Cueva, for whatever reason, had several top runners tucked away in the C team races. Factor Elizabeth Weeks, Tom Hiatt, and Nathan Buttry into the varsity races, and you have a much more encouraging outcome on the day for the Bears. It's probably not safe to be taking these Bears for safe bears yet.

And in the realm of 4A, Albuquerque Academy may have no apparent rivals among the boys, but St. Pius clearly represents a threat for the girls (and, of course, there is the great threat from up north as well). At this point in the season, St. Pius X is running much more competitively at 4 and 5 than they were last year. For the Sartans, this year holds reason to believe in what could be possible, a belief that was much more of a reach last fall.

Among 5A girls, we likely saw all of the state trophy contending teams on Saturday. Even with a DNF in the mix, Eldorado still holds a prohibitive upper hand. But, you missed something if you failed to note the strong finish by Volcano Vista. VV came within nine points of Rio Rancho for second among the 5A squads. If we insert Elizabeth Weeks back into the La Cueva varsity seven, it looks like a very interesting finish ahead for 5A girls. Old man Momentum, however, just might be dressing out in the black-and-white of VV.