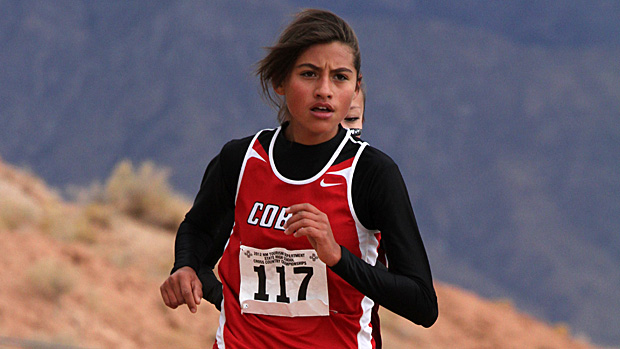 Cobre's Isa Lee finished a solid sixth as a freshman last fall. She gets an opportunity to make an improvement on that finish this fall. Photo by Alan Versaw.

This piece closes out the XC Individuals portion of the 2013 cross country previews. It won't be long until we're talking about resutls and no longer about prognostications.

As we have done with all the pieces in this series, we'll begin with a look at last year's top ten.

1. Cassie C de Baca, Pecos - C de Baca patiently bided her time at last year's state meet, and it paid off in a big way as she was able to build a solid lead in late stages of the race. With a 3200 mark of 12:10 from this spring, she demonstrated again she is ready to take a place among the best in the classification this fall.

2. Muriel Waukazoo, Najavo Prep - Waukazoo led much of last year's state race but ended up setting for second. Her track season, however stuck to races of 800 meters or shorter, making projections a little more challenging for this fall. She went across the border into Colorado to run her best 800 time of 2:43.63.

3. Jacqueline Katzman, Bosque School - After winning the 2A 1600 at state this spring (Katzman mostly avoids the 3200 in track), the Bosque senior figures to be aiming at a cross country title this fall.

4. Kendall Kelly, Bosque School - It was a nice state track meet for Kelly in May, as she claimed second in the 3200 and third in the 1600. There's not a lot of upside potential over last year in terms of state cross country places for Kelly, but finishes like those suggest there might be a little.

5. Annoesika Laughlin, Navajo Pine - Laughlin will be entering her freshman season this fall and already has a 2:31 800 to her credit. Track saw her running shorter distances, but cross country will require more of the endurance side than track did. Still, the 800 time suggests there will be more to be heard from Laughlin this fall.

6. Isa Lee, Cobre - Lee had twin 11th-place finishes in the 2A 3200 and 1600 at state this spring. Apparently, she is best suited to the longer distances and varying terrain of cross country where she finished sixth at state last fall as a freshman.

8. Addison Rauch, East Mountain - We saw nothing of East Mountain's surprising ninth grader during track season, but we saw enough of her last fall than to be dismissing her lightly for this fall.

10. Jordan Ide, Rehoboth Christian - Ide returns off a fifth-place showing (12:23) in the 2A state 3200. That finish would suggest Ide should be looking to finish higher than tenth this fall. How much higher remains to be seen.

The list of people of interest does not terminate with last year's top ten. There are a few intriguing additions to that list to be made.

Amira Cunningham, East Mountain -  Cunningham was the third East Mountain finisheer at state cross country last fall (13th), but she owns the top 3200 time in the classification from the spring at 11:58. That time also won her a state title. Be looking closely at how Cunningham runs this fall.

Griselda Rios, Loving - I do not even know if Loving has intentions of running cross country this fall, but if they do Rios clearly demonstrated at state track that she is one to watch.

Reiley Kelly, Bosque - The last we saw of Reiley Kelly was a completely uncharacteristic 28:01 at the Rio Rancho Jamboree. We certainly wish her a successful return to running this fall. If she is able to return and resume her former level, she easily ranks among the classifications' top ten candidates.

Roslyn Coriz, Laguna-Acoma - Coriz was the first one out of the top ten last year and ran solidly at 3200 meters this spring. If there's room to be found in the top ten, Coriz is a solid candidate to squeeze her way in.