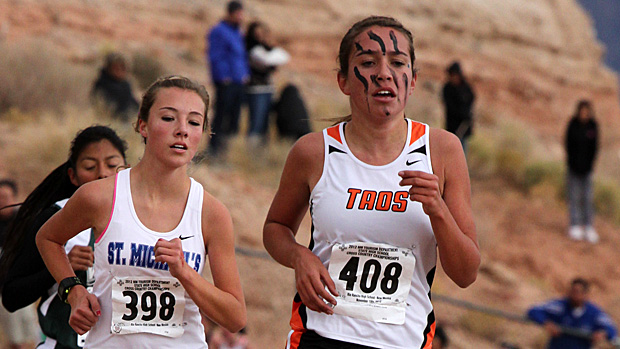 Hannah Gunther wore a few Tiger stripes at last year's state meet and has had a tiger in her tank ever since. Photo by Alan Versaw.

Most recently, we looked at the 4A boys individuals. Now it's the turn of the 3A girls. We'll take the same approach--looking first at last year's top ten from state, then searching other meet results (and especially this spring's track results) for those likely to move into the top ten this year.

1. Rachel Fleddermann, Sandia Prep - Until somebody in 3A shows she can beat Fleddermann, the Sandia Prep star remains the favorite for one more year. Fleddermann took the 3A triple crown for 2012-13: cross country, 1600, and 3200

2. Megan Herrera, Pojoaque Valley - The Pojoaque eighth grade sensation has a bright future ahead of her. Herrera stuck to 800 meters and shorter during track season, but she made it clear she can go longer in cross country season.

3. Haley Rach, Taos - Some of Rach's stiffest competition comes from her own teammate, Hannah Gunther. Rach's track season saw some struggles after the Marilyn Sepulveda meet, but it would be premature to be crossing her off the list of contenders.

4. Jordyn Romero, St. Michael's - Romero finished fifth in the state meet 3200 this spring, more or less matching her cross country finish. Her 3200 times have settled, at least for the time being, in the mid to high 12s--indicating she projects to be running similar cross country times this year as last.

5. Mari Yeppa, Sandia Prep - did not participate in track season and I do not have a year of graduation for her, not sure if she's back again this year or not

6. Hannah Gunther, Taos - Gunther's results have been riding the escalator to the next floor of late. Gunther finished fifth in the 1600 and second in the 3200 at the state meet this spring. If you're looking for someone to finish higher this year than last, Gunther would be a good prospect.

7. Hanna Grober, Sandia Prep - Grober will be back as a junior this fall and comes in sporting a 7th from the state 1600 and a fourth from the state 3200. Like Gunther, Grober's recent trend line is strongly positive.

8. Cassandra Peters, Shiprock - Peters led Shiprock to a state cross country title last fall. A repeat this fall would be sweet. Peters ran 5:34 for third in the 1600 at state this spring, which rates her ahead of quite a few on this list. Keeping Peters at eighth this fall may be a tall order.

9. Karianne Jones, Wingate - Jones returns for her senior year with a sixth-place state finish in the 3200 added to her resume. Nothing about her track season indicates she could be slipping from her 2012 cross country finish.

10. Avery Sanders, Thoreau - Sanders does not show up in any results I've received since the state cross country meet in November. Consequently, there's not much to gauge her recent development upon. We will wait and see how the season goes.

That's the top ten. All ten should be back, but there are a few who figure to be looking to move up in the standings this fall. Included among those are:

Annabella Miller, Robertson - It would be difficult to miss the brilliant state track meet that Miller enjoyed. The Robertson freshman posted a fourth-place finish in the 1600 and a seventh in the 3200. On the entire season, Miller posted the third-fastest 3200 time of all 3A competitors. All of this follows a 48th-place finish at last fall's state cross country meet. Don't look for Miller anywhere near 48th this fall.

Jordan Aguilar, Santa Fe Indian School - Aguilar is another who posted a high-ranking 3200 time during the season. If she can consistently revisit the pacing of her best 3200 in the fall, she is a threat to climb into the top ten this fall.