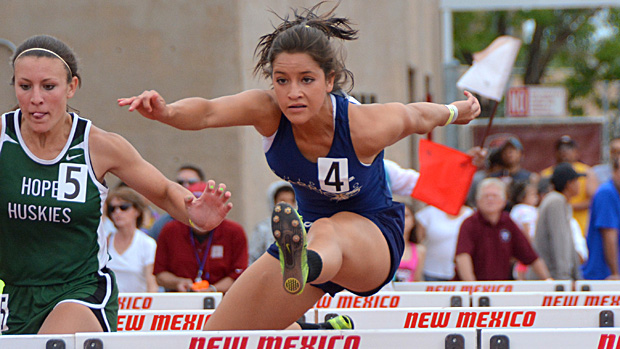 While Taos was busy fending off all threats on their way to the 2013 3A girls state title, a team from down south was busy building its resume for 2014. And, as you stack up who each team has coming back this year, it's hard not to look at Ruidoso as a very strong possibility for 2014.

It's not just the work of three girls, but Shalome Keller, Andi Harrelson, and Ryann Flack give the Warriors a solid enough core of talent to hang with anybody in the classification. Any additional points tacked on by others--and there will be some of that--makes the task of keeping pace with Ruidoso that much more daunting.

But, several teams will be trying.

Hope Christian, a team that looked like a solid title contender entering this year's state meet, will be one of those teams. The Huskies graduated a couple of key pieces from this year's team but Cierrah Kassetas (throws), Maggie Carrico (hurdles), and Michaiah Chock (sprints) have been around the track a time or two by now and have what it takes to keep this team at the top of the pile.

Taos, of course, doesn't figure to give up the throne easily. Haley Rach and Hannah Gunther handle the distance chores. Amanda Mondragon, Angelica Pacheco, and Miranda Vigil handle the sprints. The Tigers have enough of a bite coming back that they must be taken seriously. Look for them to be scoring a bundle in relays in 2014, just as they did at this year's state meet. They have the sprinters to get it done.

Bloomfield brings a solid team from the northwest corner of the state. Hurdler/pole vaulter Louisa Maestas figures to do most of the damage for the Bobcats.

And, Sandia Prep figures to keep their nose in title contention for at least one more year as well. Until there is an effective threat the Rachel Fleddermann's dominance of 3A girls distance, the Sundevils figure to pile up the points in the distance events and nickel and dime folks with points in other events. Actually, Mackenzie Blackburn in the 300 hurdles figures to be doing more than nickel-and-diming. So, count Sandia Prep among your title contenders as well.

These rankings were calculated by scoring the rankings as a meet. We took the individual rankings only and scored them as a normal meet: 10-8-6-5-4-3-2-1.

Athletes whose graduation years are unknown were left out of the list.