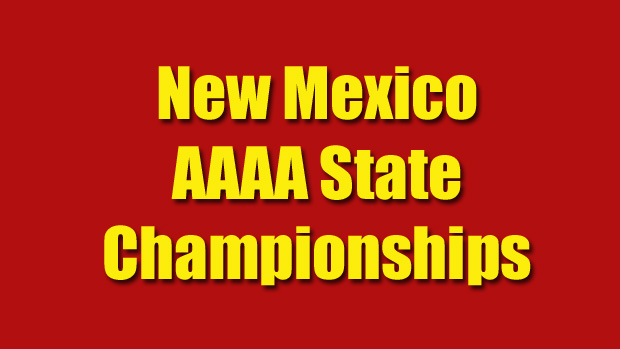 The competition at the top at 4A promises to be tight. Make sure you catch all of the action over both days.

The news is hard to miss. Yes, Albuquerque Academy and Los Alamos are alive, well, and in the hunt for the AAAA state title. The news is that they have company, real serious company.

This year could very easily turn out as a 1-2 kind of affair for the boys of the Farmington schools of Farmington High School and Piedra Vista High School.

A breakdown of potential state scoring shows Farmington and Piedra Vista in a near dead heat between the two with an edge likely going to Farmington on the basis of relays. Of course, miniscule edges don't mean much as you head into the state meet.

For Farmington, in addition to the relays the Scorpions have handled well this spring, the big production figures to come from sprinter/jumper Avery Rasher and hurdler/jumper Jeremy Klepac. 300 hurdler Dallin Payne is in position to add a few points of his own. The load will be heavy on these two guys, but if production stays steady through Saturday, there will be a lot of points going the direction of the team in green.

Piedra Vista has a few answers of their own. The Panthers spread the point-producing joy around a little better than Farmington, but don't seem to have the individuals who can throw as many points on the board as Rasher and Klepac. Still, look for points coming from sprinter Zach Johnson, sprinter/thrower Beau Clafton, hurdler Orion Kaminky, sprinter/jumper Ty Murphy, and thrower Troy Young. Distance points will be tough to come by, but if Harrison Fleming can nail a few down, that only helps the cause.

And so, Albuquerque Academy and Los Alamos, who are accustomed to doing battle with each other for the lion's share of the points, have some more friends to share with in the sandbox this year.

Los Alamos, of course, brings in the distance group that simply destroyed everyone else at the state meet in cross country. Sean Reardon and company will get their share of points at 800 meters and up. The Hilltoppers will also look toward hurdler Daniel Dunning, sprinter Simon Heath, and pole vaulter Seth Drop. Nevertheless, the bottom line for LA is that they will have to have a few guys exceed their seed marks or they're in trouble.

Both LA and AA need to steal a few relay points from what the seedings would suggest belong to PV and Farmington. If that happens, this race becomes exceptionally close. The hurdle events also have enormous potential to return this race one way or another. Each of the big four as at least one hurdler positioned to score points, so it will be important how those points fall.

AA has the luxury of sleeping in their own beds, and the value of that luxury would be difficult to overstate.

Moriarty, Los Lunas, and St. Pius probably don't quite have the point-producing potential to make a run at the big four, but they do have the potential to play spoiler in a big way by stealing points the big four may be counting on. Keep an eye on the performances of guys like Jonathan Myrick, Kade Bond, and Steven Duran.

This has the potential to be a very close state meet that goes down the placing in the 4x400. If, however, Farmington and Piedra Vista dominate the relays as the seeds suggest they might, it could be a two-team race by the time the gun goes off for the 4x400.

The story has a different cast of characters on the girls side of the ledger.

Here, if you would name a favorite, you would most likely put Aztec in that role. But, be careful to note that Aztec may have an Achilles heel in the relays. As strong the Aztec is in hurdles and field events, the relays could prove their undoing if they don't at least hold to their seedings.

Hurdler/jumper Sarah Root, jumper/thrower Kayli Farmer, and thrower Thalia Quinn should be points in the bank. Contributions should also be coming from Rikki Newland, Morgan Smith, and a sorority of others--clustered mostly in the field events.

Piedra Vista may not have enough spare parts to add to the Zhianna Flores machine to make a bona fide run at the state team title, but Flores promises to be a big part of the show that people come to see. Thowere Katie Hegarty gives PV a few more points to count on, but it will take an exceptional couple of days for PV to overcome both Aztec and LA.

One more team to watch would be Del Norte. The Knights have two of the best athletes in the state meet in Jenna Thurman and Jessica Scherer, but if these are the only two individuals who score, it doesn't figure to be enough to get the Knights onto the podium at the end of the meet.

Other teams are well back.

Don't regret the price of admission; it will be worth every penny.