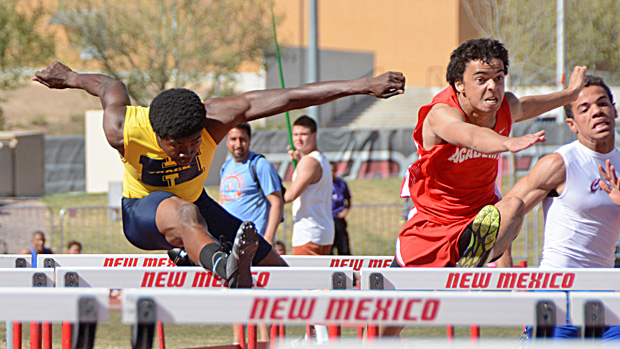 Leaving as little space as possible over the top of the hurdles, Mustafa Mudada drives toward the first of his two hurdle titles on Monday evening. Photos by Blake Wood.

Each year at mid season, most of the best track and field athletes in New Mexico converge on Albuquerque for a tradition that is more or less unique to the Land of Enchantment. The Marilyn Sepulveda is a meet of top athletes contested without relays and without regard to classification. Simply stated, the meet pits the best in the state. It's a great opportunity for the athletes invited to test themselves and a great opportunity for fans to see the best there is to see in New Mexico track and field.

Not suprisingly, it also brings out the best in a lot of athletes. And the FAT system tends to answer a few questions that stopwatch times never quite get around to resolving in the sprint events.

Hope Christian's Jonathan Miller is one of those athletes. Yesterday afternoon, Millar advanced his PR shot put mark to 56-2 and his PR discus throw to 170-8. Figuring that best two out of three takes all, that makes Millar the king of throws in New Mexico for 2013--at least until the state meet in another month. Piedra Vista's Beau Clafton won the javelin with another PR mark of 180-5.

Among the girls throws champions, only Abby Blach of Goddard managaed a PR mark (40-6 in the shot put). Alex Winebark took the discus and Aztec's Kayli Farmer the javelin.

No athlete enjoyed a better day than Zhianna Flores. Flores was already making noise last year, but the Piedra Vista junior has found a new level this year. Flores put together big wins in the 100, 200, and 300 hurdles. What was perhaps most impressive about those three wins was the open space she put between herself and the rest of the field. Her margins of victory were .14, .80, and .67 seconds, respectively. When you're up against the very best the state has to offer, that's a lot of real estate. The 300 hurdles time posted by Flores also breaks her own state 4A record. 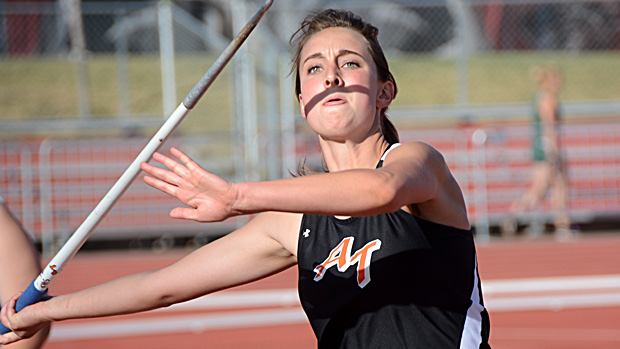 In general, San Juan County was very nicely represented on Monday. In addition to the three wins for Flores, Aztec got wins from Sarah Root (100 hurdles, triple jump) and Kayli Farmer (javelin--photo above, high jump), and Piedra Vista also got the boys javelin title via Beau Clafton. Farmington's Jeremy Klepac missed the long jump title on a tie breaker to Cassius Corley of Grants.

Jonathan Millar wasn't the only small school athlete to claim a title. Alonzo Chavez of Mora matched Millar's production with a matched set of wins in the 1600 and 3200. Adam Paz of Socorro outleaped the triple jump field. Sandia Prep's Rachel Fleddermann edged out the field in the girls 3200. And, Pojoaque's Amanda Babicke stole a little thunder from the long jump field.

Otherwise, with a couple of Alamogordo and Roswell exceptions, the event titles stayed mostly very close to Albuquerque.

Multiple event winners included Del Norte's Jennalee Thurman (800 - 2:18.77 and 1600 - 5:12.05), Alamogordo's Devin Enslen edged out PV's Zach Johnson in both the boys 100 and 200, and Highland's Mustafa Mudada did pretty much what was expected of him in dominating the boys hurdle events. Mudada's 37.81 in the 300 hurdles puts him into a territory rarely visited by New Mexico athletes. The time is barely over a half-second off the NM state record held by Highland grad Rolando Trammel.

With the Marilyn Sepulveda Meet of Champions now in the rear view mirror, all things point forward to the state championships on the second and third weekends in May. Be assured, however, that there was a lot of previewing for those contests happening on the same track last night.