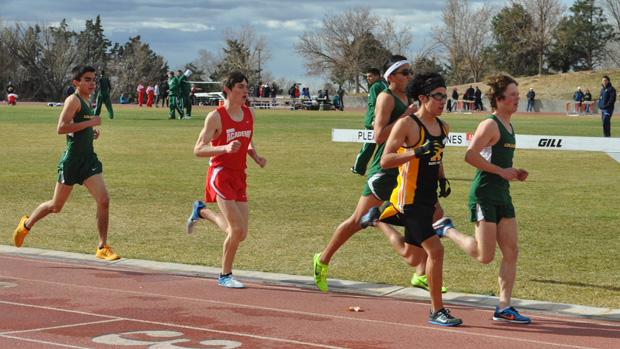 It was only a season-opening meet, more or less the equivalent of an NFL exhibition game. But somebody forgot to get that memo to the boys running at today's Chile Quad at the Albuquerque Academy track.

No less than nine boys punched their tickets to state, still more than two full months away, under the chilly conditions in Albuquerque today. Taking full advantage of ideal temperatures on the day's opening race--the 3200--four boys advanced to state in that event alone.

Leading the pack, and responsible for setting the pace that would bring three more along with him to state, with Sean Reardon of Los Alamos. Reardon, a senior, would eventually open and eight-second margin on the field to finish his race in 9:53. Preston Charlie of Rio Rancho would close in 9:53, followed by Aric Kedge (Albuquerque Academy) in 10:04 and Marcos Serna (St Pius) in 10:05. For those who don't yet know it, Kedge is only an 8th grader and is the son of AA boys coach Adam Kedge.

Despite the decided advantage in state qualifying marks, however, the team title didn't tilt in the Chargers' direction. Far from it, in fact. That distinction would belong to Rio Rancho, the lone 5A program at the meet. The Rams used superior depth and advantages in the sprint and relay events to pile up the big points, nearly doubling the total of second-place Albuquerque Academy. It would, however, be very easy to read way to much out of the team scoring in this meet. Revisit the team scoring issue between these schools again in another month or so for a much more telling read on relative strength.